If you are wondering what is the best time to visit Bhutan, well, you have come to the right place to find answers.

The beauty is Bhutan no longer a hidden secret, and it is one of the most visited countries in Asia. And so, the number of people travelling to Bhutan has also increased over the years. The best time to visit Bhutan actually depends on what you are looking for.

Considering the regions, seasons, months and the festivals in Bhutan, this is how you can decide the best time to visit Bhutan. Read ahead to decide yourself on when to visit Bhutan!

What is the best time to visit Bhutan?

Bhutan has a diverse climate throughout its regions. Overall, the climate experiences a tropical/sub-tropical climate, but winters are severe in certain regions, especially in the northern Bhutan regions.

During the summer which lasts between March to May, the weather is very pleasant with the Himalayan wildflowers blooming everywhere. The maximum temperature could reach 30-degree Celsius. Sometimes there could be light showers which are good to enjoy. During the monsoon from  July, August and mid-September, the rains are heavy and it pours a lot.

The winter begins around the end of September and lasts till March. November, December and January are the coldest months in Bhutan, with the temperatures dropping to negative in many places at nights. The snowfall in Bhutan happens also during these months.

Let’s take month by month to see what it is to travel in Bhutan every month.

December would be the start of winter in many parts of Bhutan. This is an excellent time for Bhutan trip for many reasons – the tourists will be fewer, and the weather will be cold, but still not as cold yet, which means you can explore outdoors.

January & February would be the coldest months in Bhutan, with upper regions in Central and Eastern Bhutan experiencing snowfall. If you enjoy cold winters, you might like exploring the rugged Himalayan region of Bhutan at this time.

Although this is not the time when the Bhutanese host any major events, you can still plan your trip to take part in the Trongsa Tshechu, a 3-day festival celebrated at the famous ancient temple The Trongsa Tshechu.

One of the best festivals that you shouldn’t miss is the Nomad Festival celebrated in Bumthang, where ethnic tribes and communities living in the remote regions gather to perform their unique rituals, dances and songs, part of their traditions and cultures.

Recommended for you: Know before you go – 25+ things about Bhutan No one tells you!

If you are in Punakha, you will also get a chance to witness the Punakha Tshechu, which is celebrated for than a week.

March, April and May

Spring in Bhutan is one of the best months to travel. The landscapes will turn from dark and dry to come to life – with trees being decorated with flower blooms, and the weather turning pleasant with sunshine. The gorgeous views of the valleys are treats to the senses.

During these months, you can also witness a few festivals, including Paro Tshechu and Punakha Tshechu. If you travel to Bumthang, you can witness the celebrations of Ura Yakchoe in Ura valley. Also during this time, the people of Trashigang celebrate the Gomkora Festival.

The monsoons begin in mid or late June(sometimes during the first week of June too), and lasts until the end of August. Given the high mountainous terrain in most parts of the country, these months are not the best times to travel as you will encounter torrential rainfall, landslides and road-blockades.

Due to incessant downpours, it also becomes nearly impossible to get outdoors.

There are a few special monsoon festivals that you can participate in if you are here during this time. One of the most famous is the Haa festival in the Haa Valley close to Thimphu. In Bumthang, people celebrate The Nimalung Tshechu. Also in the Chokhar valley in Bumthang The Kurjey Tshechu takes place.

After the monsoon subsides, Bhutan becomes even more beautiful. The rains give birth to lush greenery everywhere, and you will see the hills, valleys and the mountains all carpeted with greenery and plenty of beautiful Himalayan Wildflowers.

Unsurprisingly, these months are the most popular for locals as well as international travelers. The country sees a heavy influx of tourists during September, October and November months. Expect crowds and in some places, slightly higher accommodation prices.

Being the best months of the years, the Bhutanese celebrate most of the major festivals during these times.

One of the most famous festivals that attract many photographers and wildlife enthusiasts from around the world is the Black Necked Crane festival that takes place in Gangtey Gompa monastery in Gangtey town in November.

This is celebrated to welcome the arrival of the rare cranes who migrate to the Phobjhika Valley during these months. These rare birds migrate from the upper regions of Tibet plateau to the Phobjikha Valley to spend the winter every year.

Editor’s note: 20+ Fabulous Things To Do in Bumthang

The most famous among the festivals is the Thimphu Tshechu held in the capital city of Thimphu. This 3-day festival is held at the Tashichho Dzong Monastery and attracts hundreds of thousands of spectators.

You can witness the famous traditional dance of the Ox at the Wangdue Tshechu, which is held in Wangdue town in October.

Jomolhari Mountain Festival is a unique festival that was started to conserve the snow leopards and is held in October every year.

So based on the above facts, you can see that March, April, May and the months of September, October and November is the best time to visit Bhutan.

Did you know? October is also the month when Bhutan witnesses the maximum number of international travelers to its country.

Also, more than 75% of travelers arrive during these three months, which means it is best to plan your Bhutan travel well if you want the best prices and hotels.

Spring and the Fall are the best months to visit Bhutan. From March to May, the flowers are in full bloom, and you can spot the colourful Rhododendrons adorning the hills and the valleys. It is a riot of colours along with a pleasant weather making it a visually stunning time to be in Bhutan.

Similarly, before the start of the winter or during fall, from September to late November is also the other season when the tourists are in high numbers, making it the good time to travel to Bhutan.

Recommended read: 15 Awesome Things to do in Thimphu, Bhutan

Bhutan is a country with the most forest cover in the world, with over 71% of the area covered in forests, which are classified as reserve areas prohibited for a living or any civilization.

Also, the upper regions or the northern regions of Bhutan consist of the Himalayan mountains covered in snow, glaciers and valleys of inhabitable hills. These leave Bhutan with only the lower areas to travel and explore.

Here is what you can expect to decide the best time to visit Bhutan region wise.

The south-western region of the country roughly includes Paro, Thimphu, Haa Valley and Punakha, which offers a lot of things to do in Bhutan. If you want to witness these places in all colours, with the fruits and the flowers in full bloom, head there between March and May, mainly to Paro and the Haa valley.

October is when the country celebrates its main festivals, and the capital of Bhutan, Thimpu is an excellent place to be during this time.

The central-eastern region consists of Trongsa, Wangdue, Gangtey and Bumthang. The best time to visit Gangtey or Phobjhika valley is November.

The winter is colder in these regions due to their slightly higher altitude and proximity to the snow-capped more upper Himalayas. But that’s also what makes it a great time to witness snow and the gorgeous views of the peaks in Trongsa.

Head to Bumthang in October or November as the weather is perfect and the fields are the greenest!

Bhutan’s culture comes to the full display and in glory during the fall. AS mentioned above, September, October, and November are the best months to see some of the country’s most important Tshechu festivals.

Hiking is a great way to see the beautiful sights of this incredible country Bhutan. The ideal times to trek in high altitude regions are in March, April, October and November when skies are clear and temperatures are pleasant.

If you trek in March and April, you will have an excellent chance to get the lovely views of myriad rhododendrons and may also see wildlife coming out having just woken up from hibernation.

Recommended read: A Guide to a Solo Trek To The Tiger’s Nest in Paro

High and low season rates for International Travelers in Bhutan

If you are not a citizen of India, Bangladesh or the Maldives, you can’t travel in Bhutan independently. The only way to travel in Bhutan for the rest of the world is to book a tour through a licensed Bhutanese Tour Operator.

Also, there are minimum daily package rates set by the Bhutanese government for all tours. The minimum daily package rate for the high season is 250 USD per person per day and 200 USD per person per day, where the high season is from March to May and October to December, and the rest of the months falling into low season category.

So when did you travel to Bhutan, and what did you like the most? If you haven’t been there yet, you should plan your trip to Bhutan now!

PIN THE BEST TIME TO VISIT BHUTAN TO READ LATER 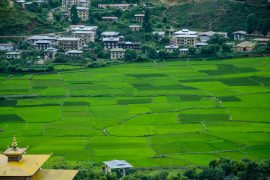 30 Incredible Bhutan Facts That No One Tells You! 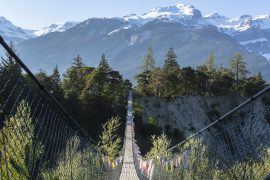 15 Top Places To Visit In Punakha in Bhutan 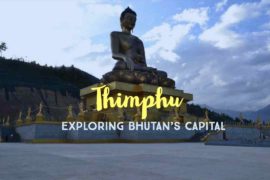