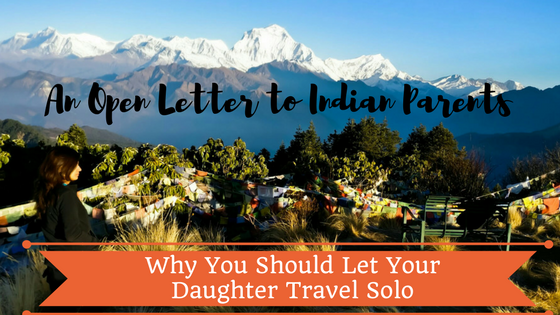 An Open Letter To Indian Parents – Why You Should Let Your Daughter Travel Solo. At Least, Once.

Recently, I had gone to attend TTF, a travel trade show that was held in Bangalore. As I was walking, a girl ran from behind and stopped in front of me and introduced herself. We exchanged pleasantries and she began.

“I got your card yesterday from my colleague. I love travelling a lot and so I went home and read your blog. I’m really inspired by you. I have a lot of questions for you, but the most important ones are,

Do you REALLY travel alone all the time?

How do you convince your parents?”

I felt a mixture of emotions. I felt happy and humbled that I had inspired someone. Her questions also reminded me of the way people perceive travel in India.

I answered, “Yes, most of the time, I travel alone. It’s been close to 3 years now. Since becoming a full-time blogger and a traveller, I travel for long periods now and my friends or family often don’t have so much time to accompany, which means I mostly travel solo.”

She looked partly convinced, excited and thrilled at the same time. Then, I tried answering the second part.

“I had a tough time convincing my parents at the beginning. But I started small. My dad still worries every time I pack my bags, but I stay in touch as much as I can and now that this is what I mostly do, he has accepted it and supports me.”

To which she replied in bewilderment, “I think that’s because you are from Bangalore. My parents are from UP, and I want to travel alone so much, but it has never been possible. I always have to give the numbers of my friends, show my photos with them for proof, and convince for so long before I plan or think of a trip, leave alone traveling solo!”

Are parents in Bangalore cooler than the ones in UP?

I said, “Whether you are from UP or Karnataka, it doesn’t matter. The bottom line is they are parents, and especially, they are Indian parents!

She got my point then and asked for travel tips. We chatted for a while before I took off.

The conversation ended there, but my thoughts hadn’t.

As for the first question, I have got used to all kinds of questions for travelling solo, the most irrelevant and the unexpected one being, “Are you straight?”

So I have reached a point where I don’t feel annoyed or pressurised anymore. In fact, I have my answers ready depending on who asks me the question.

Well, it was her second question that made me wonder.

Why is this part so difficult? Why in India is a girl going by herself on a trip such a big deal?

I had this urge to blog about the misconceptions, fears, the mindset of Indian parents and our culture in general, which unfortunately stops thousands of girls at home to step out. Although I have already blogged positively about solo travelling, I specifically wanted to touch upon parents’ part. 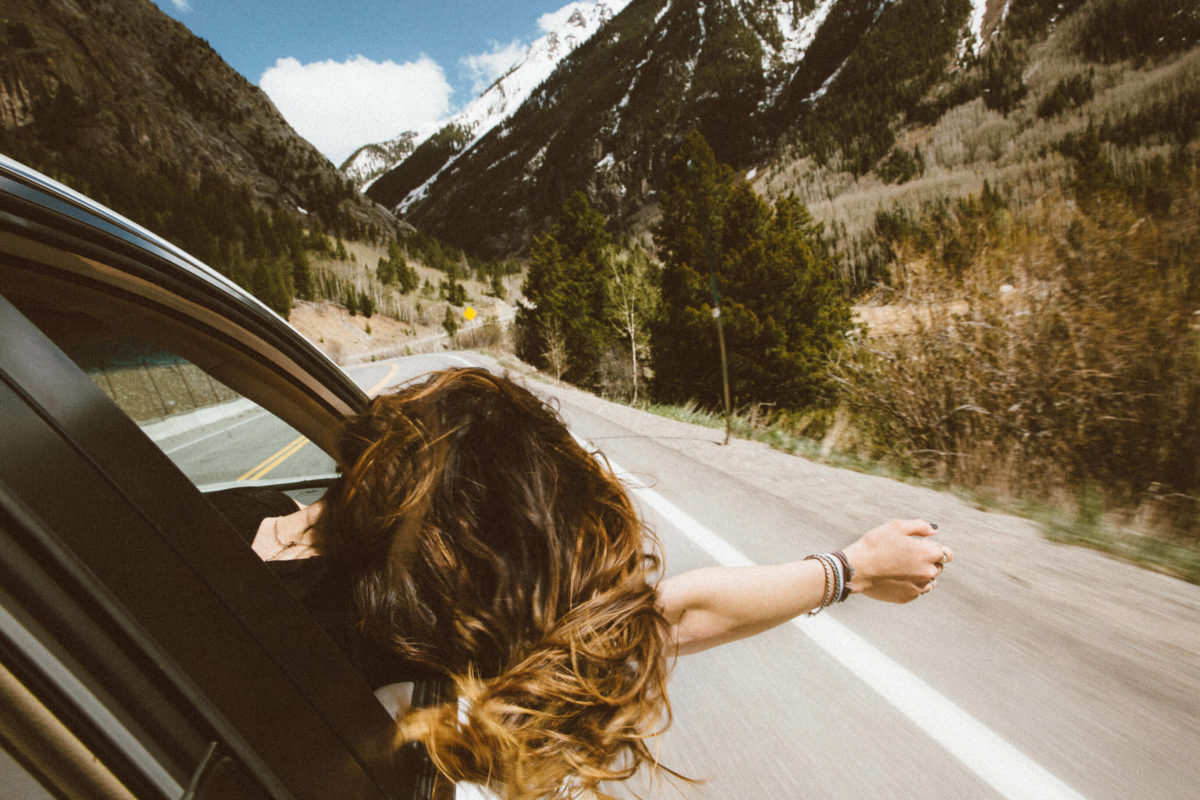 On this women’s day, I want to share some of these with the parents of daughters of India. I sincerely hope you do read this.

I’m Reshma, a next-door Indian girl who grew up in a pampered, typical Indian middle-class family. I joined the rank race in school, tried hard to stay at the top, graduated to became an engineer (I know, no surprises here), only to realise that I didn’t like my job nor my degree. After I found that I am the happiest while travelling and writing, I took it up as my full-time job years later when I finally mustered enough courage last year.

Okay, I know you might already be having a lot of thoughts and questions. I might even have broken many ‘societal norms’ in your eyes already. But let’s keep that aside for now, because today it’s not about me, but about the daughters like me.

I’m not old or wise enough to advise or suggest. But based on what I have learnt during my travelling and what life has offered, I want to share my slice of thoughts.

You pamper your daughters, protect them, and give them the best that you can. You give the best education. She gets a job and earns some money. A few years later, one day you marry her off to a suitable boy. Her first stage of life is ‘settled’, you have carried out your major ‘responsibilities’ and her first ‘milestone’ is met. Well, if you ask me what the second milestone is, it is having a kid.

So I’m skipping this scheduled timelines of life as set by our society for now as it’s a different ball game altogether.

So coming back to my point, all these might be the things that you would want to do from your end for your daughter.

But, what does your daughter want? Can and what if she at any point begs to differ?

What if she comes to you one day and tells that she wants more out of life than these? What if she says she wants to experience things that are not in this ladder?

What happens if she flies from the warm nest and takes a trip alone? Would you let her take the trip that she’s been dreaming of for so long?

Let’s assume and imagine that she gets the ‘permission’ to travel and gets lucky to do that solo trip.

So when your daughter does travels alone, she basically gets a chance to put into practice all that you have thought throughout her life.

Remember, you pampered her from the cradle and she is your doting princess. Now she has flown and there is no one beside her. She has to plan, take care, protect her and of course, yes, travel!

It will scare her in the beginning. She will be overwhelmed. The strangers around her will intimidate her. She’ll miss the comforts of home and the fear of stepping out of that zone will look threatening to her.

But, the truth is, all these will pass. The moment she boards that bus or lands in a new town, she’ll smile and realise that they were only the demons in her head. So, she’ll rise. She’ll bounce up.

No, I’m not painting a rosy picture or trying to be poetic, but my point is, she will surely be OKAY.

More than everything, she’ll realise that the world around is not as bad as she had imagined or conceived. The warmth and kindness of the strangers, the smiling faces of the kids, the clouds, rivers, mountains, food, culture and the beaches will make her immensely happy. She’ll learn to let go of things that are beyond her control. When she misses the luxury she had back home, she’ll start valuing what she has.

She’ll appreciate the little things that she gets on the road. She’ll also understand that she doesn’t need a knight in the armour to save and protect her always, and she can be self-reliable.

When your daughter returns from a trip, she would be a self-reliant, smart, compassionate and a wonderful woman with loads of experiences and lessons for life.

I don’t imply that she was not any of these before the trip or she has to travel to become self-reliant. What I mean is travel is a great teacher. It brings in experiences that are unique, priceless and memorable.

So next time when your daughter asks for your permission to go on that weekend trip, please do allow her.

Make sure she takes all the precautions and keeps in touch with you, but please do allow her to spread her wings and fly, at least for a while!

On a side note, I don’t imply this only to young women. This is for my fellow women of all age groups out there. In fact, whether it’s a woman or a man, a son or a daughter, young or old, rich or poor, I think we all should venture out at least once alone to differently experience the beautiful world that we live in. #WomensDay

Recommended read: What to wear in India?

Please note that the thoughts expressed are purely my opinions. If you feel differently, then I don’t have any complaints or grudges against you! ☺

This post has been published in Youth Ki Awaaz. You can read the article here. 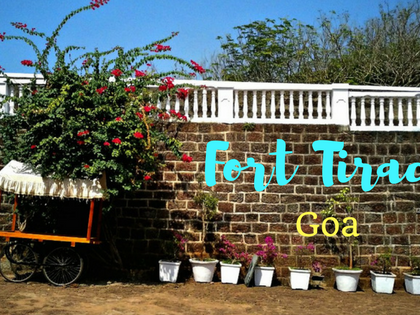 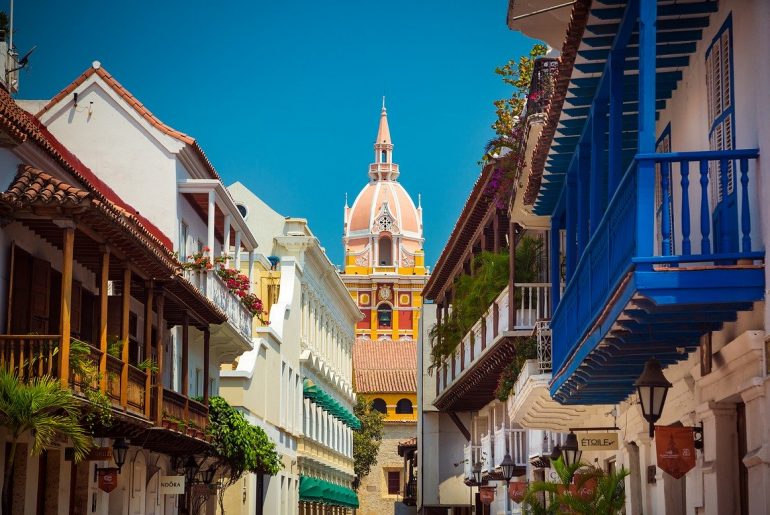 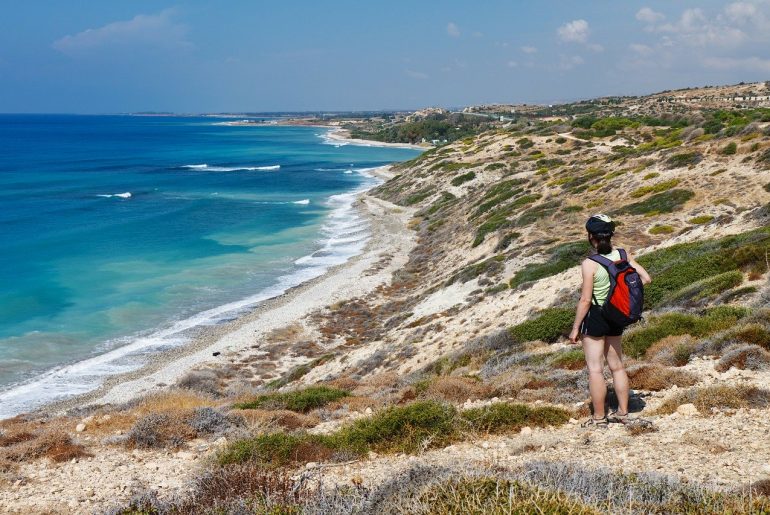 Traveling Alone For The First Time? 25 Things To Know 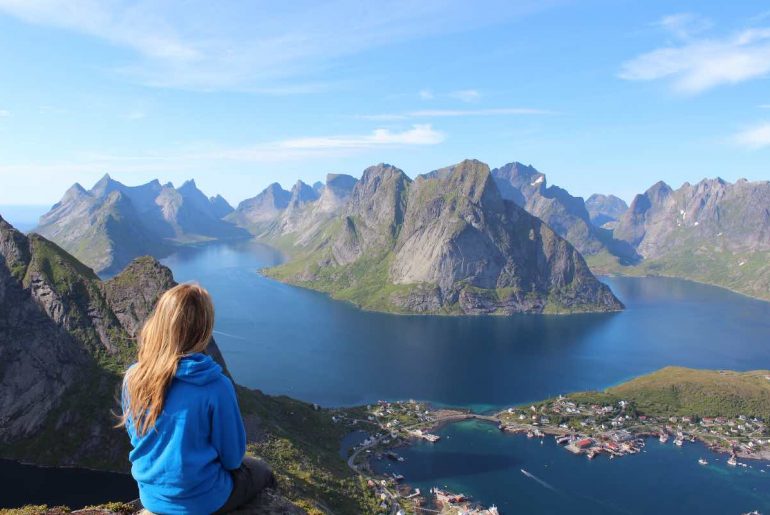 126 Solo Travel Quotes To Inspire You to Travel Alone Without Fear!